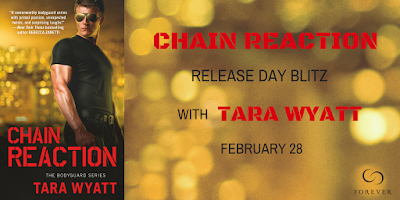 CHAIN REACTION
Series: Bodyguard #3
By Tara Wyatt
ABOUT THE BOOK:

SHE NEEDS A LOVER AND A FIGHTER

Blonde. Beautiful. Talented. Alexa Fairfax is practically Hollywood royalty. But growing up in a family of legendary movie stars also puts her in the spotlight for danger. And after she discovers a plot more deadly than any movie script, Alexa desperately needs a bodyguard. A man like Zack De Luca. A true friend with a good heart, a protective nature-and the hard, chiseled muscles to back it up.

Zack has always been wildly attracted to Alexa. But since he's training day and night to be an MMA fighter, he's afraid his gorgeous friend will only distract him from his goal. Indescribably sweet and irresistibly sexy, Alexa needs Zack to pretend to be her boyfriend after her life is threatened. Now this fighter-in-training will have to fight his own intense feelings-to keep their little charade from turning into a major disaster . . . 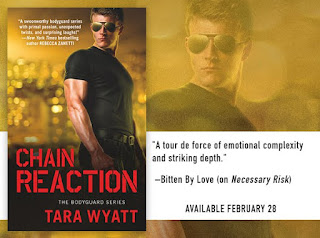 
She leaned her back against the door and shut her eyes, her face ghostly white. Her hands shook as she adjusted the strap of her purse on her shoulder.
Frowning, Zack shoved his hands into the pockets of his jeans and headed toward her. She smiled weakly when she saw him, her lips twitching up for a second, but the smile didn’t reach her eyes. Her fingers curled around the strap of her purse, her knuckles going the same shade of white as her face. Something hot and protective tightened his chest, and for a crazy second, he wanted to reach out and pull her into his arms, to promise her that, whatever it was, she’d be okay.
Instead he stopped a few feet in front of her, his hands still in his pockets. “Alexa? You okay?”
Her eyes met his, and she sucked in a shaky breath. “I...Oh God.” She pressed her hands to her face and let out a soft sob, her shoulders trembling.
Zack yanked his hands from his pockets and pulled Alexa into his arms, cradling her against his chest. She felt so tiny, so vulnerable. She barely reached his shoulder despite the fact that she had heels on.
“What happened? Did someone hurt you?” he whispered into her light-blond hair, so fine and soft under his fingers as he stroked the back of her head. So help him God, if someone had hurt her, he would make them bleed.
She pulled back, just enough to look up at him, and he noticed the mascara smudged under her eye. He left his arms around her. It would’ve felt wrong to take them away.
She shook her head slowly, her bottom lip caught between her teeth. “I...don’t think...I can’t.”
“Do you want to go outside? Get some fresh air?” Maybe if she calmed down a little, she’d be able to tell him what the hell had her so...It was more than upset.
The poor girl was fucking spooked.
She hesitated a second before nodding. Without a word he tucked her under his arm, shielding her from the view of the other party guests. He led her down a hallway off the foyer and into the garage, where a side door led into the quiet, dark backyard. The noise from the party filtered out through the open windows, mingling with the soft gurgle of water from the pool. A cool spring breeze rustled the palm fronds and teased Alexa’s shoulder-length hair around her jaw. She brushed it aside as he led her to a stone bench off to the right, their backs to the house.
For several moments they just sat, Alexa sniffling and staring blankly at the still water of the pool. Zack stroked a hand up and down her back, hoping to comfort her in some way. He’d spent the past year as a bodyguard honing his protective instincts, and they now came to life, alarm bells ringing through his skull. Something was very, very wrong.
When she finally spoke, she surprised him with her question. “Who’s the party for? Sierra was cagey about it on the phone earlier.”
Zack glanced back at the house. “Oh. Uh, for Taylor and Colt. They got married in Vegas last weekend.”
Alexa’s head whipped around. “What? But didn’t they just get together?”
“Yeah.”
“They’re crazy.” She shook her head, but he could hear the smile in her voice.
“That’s what I said.”
Gently, she laid a hand on his arm, the tips of her fingers warm against his skin. “Are you okay?”
Fuck, she was so sweet. He was supposed to be comforting her and finding out why she’d suddenly burst into tears, and she was worried about him because his ex-girlfriend had eloped.
He laid a hand over hers, allowing himself the luxury of tracing his thumb over her delicate knuckles. “I’m fine. Just surprised, like everyone, I think. You gonna tell me what’s wrong?”
She sighed heavily. “I don’t even know where to start.” “Beginning’s usually a good place.”
She scoffed out a laugh. “That would take too long.”
He turned to face her. “Did someone hurt you? What happened, Alexa?” A tremble coursed through her, and he wished he were wearing more than a T-shirt and jeans so that he had a jacket or a sweater to offer her. But he didn’t, so instead he pulled her close and tucked her against him. “Please tell me. I want to help.”
She swallowed thickly and looked up at him, meeting his gaze. “I...I think my dad’s a murderer and that I might be in a lot of trouble.”
Excerpted from CHAIN REACTION by Tara Wyatt. Copyright © 2017 by Tara Wyatt. Reprinted with permission of Forever. All rights reserved. 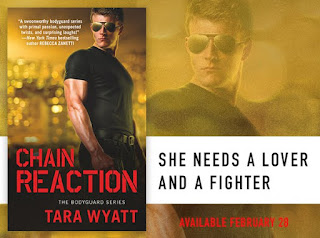 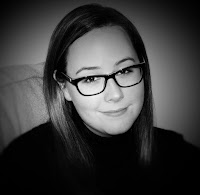 Tara Wyatt has been making up love stories ever since she fell head over heels for the Backstreet Boys almost twenty years ago. Winner of the Unpublished Winter Rose Award, Linda Howard Award of Excellence and the Heart of the West Award, Tara lives in Hamilton, Ontario with the cutest dog in the world and a husband that makes all of her heroes look like chumps.