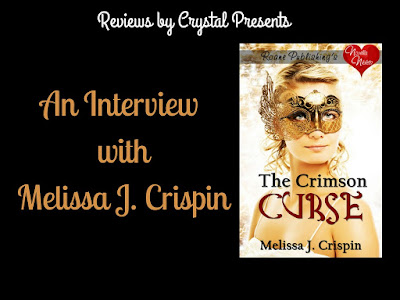 Crystal: I am so happy to have Melissa J. Crispin here today. Welcome Melissa! Would you share a little bit about yourself with us today?


Melissa: Hi Crystal, Before we get started, I just wanted to say thank you so much for having me on your blog today! I’m excited to be here. I was born and raised in Connecticut where I still live today. I’m married with two kids, and I work full-time for a software company that builds solutions for people in the finance industry. It’s often challenging to find time to write, but it’s totally worth the effort. I can’t imagine not doing it.

Melissa: I have two projects that I’m bouncing between at the moment.
I’m working on Book 2 of my YA fantasy series that’s published with Evernight Teen. I’d give you the temporary title if I had one, but I’ve managed to finish a full first draft and still not come up with a name I like. P.S. – My inability to come up with a title is driving me crazy. Book 1 is called Collide, and I’m trying to come up with a clever one word title for the next installment.
Also, I’m working on a futuristic sci-fi romance where the President’s daughter falls in love with a galactic garbage man. Although, he is really the son of a mobster that has shady dealings with the president, and both main characters find themselves in the middle of all the madness.

Melissa: My current release was inspired by a picture prompt for an anthology call by Roane Publishing. I originally wanted to submit The Crimson Curse for consideration in their Masked Hearts anthology, where all the stories somehow had to incorporate a mysterious woman wearing a golden mask. When I looked at the picture, I kicked around ideas why she would hide behind a mask that didn’t involve going to a costume party. I’ve always adored Disney’s Beauty and the Beast, and started to wonder what it would be like if the woman was cursed and disfigured, and needed to find true love to break the curse. The more I thought about the concept, the more it grew on me, and so I went for it.
Unfortunately, I had a devastating personal thing happen right before the deadline, and I was unable to finish it. When Roane put out a call for a new novella line, I took it as a sign to get my butt back to work. I was so happy when they accepted it for publication.

Melissa: Most of my writing time is very early in the morning before I need to get ready for the day job. I’m usually too sleepy to be hungry. :) The only thing I usually have with me is a giant cup of coffee.

Melissa: My favorite scene in The Crimson Curse is when Bastian’s daughter, Yareena, together with Calliope’s servants, put on a Royal Ball. The vision of Calliope and Bastian dressed in formal attire, enjoying each other’s company and waltzing the night away marks a turning point in their relationship. They hated each other when they first met, and slowly started to come around the longer they spent together. Here, in this scene, a mutual attraction becomes obvious between them.

Melissa: One of my main hobbies when I’m not working or writing is reading. I mostly read LOTS of romance, ya, fantasy/sci-fi, and any mixture of the mentioned genres. For one thing, there’s no greater escape than an awesome book. For another, I believe reading widely and often helps to make me a better writer.
Sometimes it’s tough to sneak in the time to read, so I also listen to audiobooks constantly. I seriously heart audiobooks. It’s a multi-taskers dream. Listening to audiobooks when I’m in the car alone or walking the dog allows me to get new stories in while going about my everyday life. How cool is that?

Melissa: It depends on the scene. Most times, I opt for silence, but there are a few exceptions. If I’m writing a big battle scene or something that is strongly rooted in a fantasy world, I may put on a Break of Reality album. If you aren’t familiar with them, they are a cello rock band and their music is incredible. I find it inspiring when I need to immerse myself in a different world.
If I’m writing a YA romance scene, I have been known to put on an Ed Sheeran song or two.

Crystal:  Thanks for visiting. It has been a pleasure having you visit today. Can you think of anything else you would like to share with us today?

Melissa: Thanks so much for letting me stop by! I hope that readers will check out The Crimson Curse. At the heart of the story, it is a Beauty and the Beast retelling where the woman is the beast. I thought it would be an interesting spin on the original tale, and I hope that people will enjoy reading it as much as I loved writing it.

Cursed and disfigured, Calliope must find true love before the final leaf falls from the Enchanted Tree. Being bound to her mansion on the outskirts of town leaves her with little hope.

Abandoned by his wife for a wealthy man, Bastian only needs one female in his life, his five-year-old daughter, Yareena. When she goes missing during a raging fire, fate brings him to a strange place where he encounters a woman wearing a golden mask.

An attack by rogues puts Bastian in Calliope’s care. As he struggles against pride and prejudice, Bastian can't ignore his growing attraction to the kind soul behind the mask.

Yareena and the mansion staff do their best at matchmaking, but Calliope can't reveal her darkest secret. Will Bastian discover her true beauty before it’s too late?

~*~*~*~*~
About Melissa J. Crispin
Melissa J. Crispin lives in Connecticut with her husband, two kids, and an adorable Siberian Husky. She spends her days in the corporate world, and pursues her passion for writing in the late nights and early mornings.

From micro-fiction to novels, Melissa loves to write stories in varying lengths. But, no matter the story, it's almost always about the romance.
LINKS:
Website: http://MelissaJCrispin.com
Posted by Reviews By Crystal at 1:30 AM