#Interview - In My Blood By Kenneth Gordon 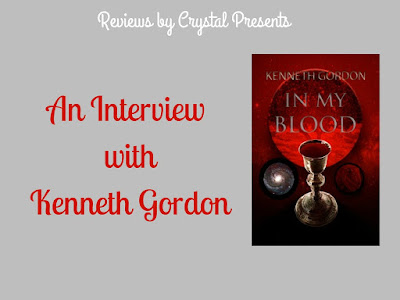 In My Blood
By Kenneth Gordon

Crystal: Today I have the pleasure of hosting  Kenneth Gordon. Welcome Kenneth! I'm happy you are here today. Would you share a little bit about yourself with us today?

Kenneth: I have many interests and many talents, which range from programming to creating and playing music to writing sci-fi stories.

Kenneth: It is hard to narrow down when there are so many to choose from. In my story, In My Blood, Thom is taken to a clothing store to get some new clothes. He stands on a stool where his entire body is scanned. Then he looks through all the different possibilities and can try them on his virtual self before any purchase is made. The pieces are then custom-made on the spot for him and final fittings are set.
That’s something I’d like to see in our world.

Kenneth: That is an interesting story unto itself. I had taken my cat, Frodo, outside for a quick lap around the yard. A large truck came by and scared him. He is an orange tabby and very strong, so I had to hold on tight to keep him from running away. In the process, he tore my shirt and my flesh. My chest looked like a reverse N. That’s when my mind went off! “Maybe there is a plague on a alien world and emissaries were sent to find the chosen one, who would bear this mark.”

Months later the work was complete.

Kenneth:  Currently, I’m working on a story inspired by the life of Randy Kramer. He was supposedly taken from his bed as a teenager, spent 20 years serving in space as a Marine and was returned to the past.

Thus far, I have my character in boot camp.

Kenneth:  Not particularly. It all depends on what time is available and my interest level. When I write, I’ll have my Pandora going in the background. The station is instrumental music. I find it boosts creativity.

Kenneth: I always have to do some sort of research for my books. For my latest, In My Blood, I worked with an HIV doc to help me make the plague plausible and the cure viable. I learned that certain mushrooms are used to help cure disease.

There is a plague on an alien world and emissaries have been sent to all inhabited planets to find the Chosen One. It is he that will cure that plague that now afflicts so many. It is spreading beyond the Tech-nu Province. This disease has a 100% fatality rate. It begins with flu-like symptoms; the patients feel better after a couple of days. They believe they are fine, but will die within six months with a completely black heart.
Thomas Anderson, from New Hampshire, is just about to start his third year of pre-med at Emory University when he meets a strange little man. This man tries to convince him that he is the “Chosen One.” Thinking this man is insane, Thom dismisses the entire idea until the man’s car turns into a spaceship and flies off into the sky.

Tom is whisked away to the whirlpool galaxy as he starts researching the plague and begins working towards a cure. He is given a bodyguard, a large yellow reptilian alien, and meets with the Galactic Council, and sets to work in earnest to find the cure and live up to his “Chosen One” title.

Little does he know that the cure will cost him everything. He must decide if he is willing to give up his life for a people he doesn’t know on a world that is not his own.

In My Blood will be released by Class Act Books in May, 2017. It will be available at the publisher’s website, as well as amazon.com.

“I really don’t know what exactly I can do. I’m only in my third year of pre med with one infectious disease class under my belt.”

“My son tells me that you are the Chosen One, therefore you will cure this plague. I must confess to you human, that I have my doubts about you.”

“You are indeed the Chosen One. Forgive my doubts.” El-min bowed his head low.

“Nothing to forgive.” Thom said as he put on his shirt, “Truth be told, I’m not sure I can live up to your ideal, but I’ll try my best. Can I get…”

El-min raised his hand, “I just received a message from the ship that we are about to make our first jump. Please sit down and prepare yourselves.”

“Don’t we need seatbelts or something?” Anderson asked.

“Oh yeah. Ok, same deal.” Thom said as his body stiffened, not knowing what to expect.

Thom closed his eyes tight and gripped the chair with a white knuckled grip. There was a strange rushing sound. He dared not look, but his curiosity got the better of him and he peeked open one eye. It was as if space itself were passing through the ship and him. He could see stars, constellations, planets like the ship was invisible and he was traveling alone in the dark, cold, vastness. Particles passed by him; he felt he could reach out and touch the very fabric of spacetime itself. In an instant it all compressed and whirled past him at incomprehensible speed yet the ride was as non eventful as sitting on his own couch. All at once the wall of the ship came back into view and the trip continued as nothing had even happened.

“You felt the acceleration, human? Thom.”

“As I said, we made our first jump. There will be several others before we reach home. The seats and restraint system are merely to prevent disorientation. You look pale, human.”

“Guess I got a little disorientated.” He chuckled.

Thom stood up. He was a little shaky, swooned, and wobbled.

“Perhaps you should get some rest.”

Kai-min showed him to his quarters.

“Happened to me my first time too.” His friend said.

Kai laughed, “No. You’ll have your space legs in no time.”

“Good, because for a minute, I thought I might have contracted your plague.”
“Not possible, you are the…”

“You are immune to the plague. I will see you later, get some rest.”

The bed was a slightly raised surface with some sort of squishy foam on top. There was a white sheet folded under the corners of the padding. Thom sat on the bed, took off his shoes and raised his legs up and over onto the padding. He then pulled the sheet up over him and instantly fell asleep. 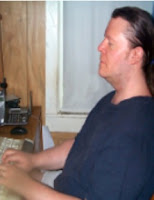 Kenneth Gordon grew up in Milford, NH and still lived in that state.

When he isn’t writing scifi-infused horror novels, he plays PC games, electric and acoustic guitars, and drums. He also holds a brown belt in Kung Fu.

Posted by Reviews By Crystal at 3:26 AM

Email ThisBlogThis!Share to TwitterShare to FacebookShare to Pinterest
Labels: @KennethGordon69