Red Hots: A Valentine Anthology
by Caitlyn Lynch + 17 others 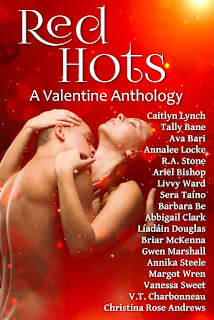 Red Hots is a steamy collection of Valentine's Day themed stories by 18 new and established romantic erotica authors. From a lonely lighthouse keeper's strange encounter with a ghostly sea captain to a husband surprising his wife with a sexy game; from an alien discovering just what Valentine's Day means to her human lover to a store owner receiving an unexpected Gift With Purchase that makes her best friend look at her VERY differently, there is something here for everyone who loves the Valentine tradition!

It wasn’t long at all before the doorbell rang; Raquel hurried to answer it. The electrician was tall, with dark hair, high cheekbones and blue, blue eyes. Stubble shadowed his strong jaw, giving him a rough-and-ready sort of look. Broad shoulders strained at the seams of his blue work shirt, which had SCOTT stitched in neatly machined letters on the breast pocket. There was a toolbelt hanging around his waist, black jeans clinging snugly to his long legs.

“Mrs. Morrison? You need an electrician?” His voice was a low, husky rumble, those incredibly blue eyes intent as his gaze swept over her, taking in her dress, her shoes, her hair and makeup before giving her a slow, appreciative smile. A little shiver of lustful anticipation rippled through her; she sternly ordered her knees not to shake.

“Yes, our power’s gone out.” She was still holding the candle, though she could see him perfectly well by the streetlights; he smirked at it and produced a big flashlight, handing it to her.

“You want to show me to your fuse box?”

She accepted the flashlight, put the candle down on the sideboard and gestured for him to follow her through to the garage, where she knew the electrical switchboard was. Walking through the house, she had the distinct impression that Scott was watching her ass, the sway of her hips as she moved.

Well, you did put this dress on for a reason, Raquel, she told herself, a little smirk of feminine triumph touching her lips.

Annika Steele began writing at the age of 8, but abandoned her stories in college. A ridiculous number of years later, she stumbled across fanfic, put fingers to keyboard, and hasn’t stopped writing since.  You can follow her on Tumblr at annikasteele.tumblr.com or on Facebook at www.facebook.com/annikasteelewrites


Margot Wren has been writing ever since she realized that's how stories get made. In between projects she contemplates the universe, yields to the demands of her two cats, and bakes more cookies than she can eat.

You can find Margot on Tumblr at margot-wren.tumblr.com

Caitlyn Lynch is an Australian erotica author and happily married mother of two. She has a number of published works available on Amazon.


Ariel Bishop is an American erotica author who feels strongly that all love triangles are best resolved through healthy polyamory.

You can find her on Facebook at www.facebook.com/arielbishopauthor and on Tumblr at ariel-bishop.tumblr.com


Christina Rose Andrews is actually two friends, Lark and Rose, writing under one pen name. Lark boasts a degree in "Do you want fries with that?" and is a proud parent of two dogs and one cat. Rose considered becoming a cult leader before deciding it was too much effort. In her spare time, Rose likes watering her plant and plotting to take over the world.

Vanessa Sweet may be summoned under the cover of night with offerings of chocolate and erotica. She is mildly shocked that her submission for this anthology contains neither bondage or spanking.

She can be found on Tumblr at vanessa-sweet.tumblr.com


Gwen Marshall lives in a full house with 2 cats, a dog, a child and a husband in the Pacific Northwest. When not writing, she spends her time at the local comic book store or playing softball.

Tally Bane lives on the west coast of the US with her husband, children and pets. A stay at home mom who spends her free time dreaming up new stories to tell her readers.


Barbara Be is a German woman who lives on the internet and feels half as old as she really is. She loves writing aliens and elves, and she's also a sorceress of all things computers, an engineer, a mother, a good cook and a master of procrastination.


A lifelong lover of reading, writing, and dark-haired hotties, Ava Bari is a junior in college pursuing a degree in English. When not hitting the keyboard she can be found hitting up Amazon. This is her second published story.

Find out more at avabari.tumblr.com


Briar McKenna was told that the only secret to writing is sitting at a typewriter and bleeding, well she tried that but all that came out was glitter. Hailing from red dirt country she has half a degree in Anthropology and a dumpster worth of thoughts to share with you anyway.

You can find her on Twitter at twitter.com/briarmadeshiny and Tumblr at briarmakeshinies.tumblr.com


R. A. Stone has been a lover of romance novels for most of her life. She’s dabbled in writing through the last decade and aspires to write more with the support of her daughter and their dog, Rocco.

Find her on Tumblr at r-a-stone.tumblr.com


Livvy Ward was born and raised in Australia. She’s been a fan and avid reader of paranormal romances for the past twenty years and has just recently made the transition to professional writing.


Annalee Locke lives in the middle of the US. While usually found working or catering to the whims of two cats, you can sometimes spot her dancing in grocery stores or staring into space, mapping out her next writing project.

Sera Taíno is a married mother of two. She earned a Bachelor of Arts Degree from Rutgers University and currently lives in the Southern United States. When she isn’t teaching middle schoolers the fine art of writing and running a creative writing club, she is at her desk, working tirelessly on her next project.


Abbigail Clark is a seventy-five year old woman trapped in a twenty-two year old body, so kindly step off the grass, dear.

In her spare time, when she isn’t writing stories, Abbigail loves to sing Strauss to her collection of bobbleheads and sew hoop skirts for her mother’s poodle, Charles.


Líadáin Douglas is an American author of erotica stories. Also an avid reader, she enjoys taking an active role in various creative communities. All creativity is art, regardless of medium.

She publishes primarily in the LGBT genre and you can find her works on Amazon.


A born-and-raised California girl, V. T. Charbonneau's favorite word growing up was "dangerous." Thirty years later she's still rocking that West Coast life along with two cats, one dog, and a husband. Dangerous remains her favorite word, but she's learned a few more in the meantime. She uses them to write steamy fiction with hot guys, smart girls, and a touch of romance.

You can find her published works on Amazon. You can also find her at: