In a desperate attempt to keep things the same, they change everything. Now there’s a secret behind the row-house walls of Emerson Street. 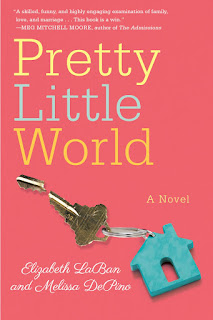 On a cozy street in Philadelphia, three neighboring families have become the best of friends. They can’t imagine life without one another—until one family outgrows their tiny row house. In a bid to stay together, a crazy idea is born: What if they tear down the walls between their homes and live together under one roof? And so an experiment begins.

In PRETTY LITTLE WORLD, authors and real-life friends and neighbors Elizabeth LaBan (The Tragedy Paper, The Grandparents Handbook, and The Restaurant Critic's Wife) and Melissa DePino present a snapshot of a modern family with a sentimental yearning for community. Bucking the trend of an increasingly fragmented society more accustomed to isolation than cooperation, the friends create a shared space that's as practical as it is idyllic—six adults to keep you company, six pair of hands to pick up the slack with the kids and the housework. But before long, love, lies, and lust collide, and their "pretty little world" gets rocked by reality.


Celia and Mark now have the space they need, but is this really what Celia’s increasingly distant husband wants? Stephanie embraces the idea of one big, happy family, but has she considered how it may exacerbate the stark differences between her and her husband, Chris? While Hope always wanted a larger family with Leo, will caring for all the children really satisfy that need?

Commune, co-op, urban Utopia...their unconventional living arrangement helps them discover much of the magic they hoped for in a loving, extended family. It will also test each couple's bond. Behind closed doors, they strive to preserve the closeness they treasure. But when the walls come down, the boundaries get blurred, and they find themselves crossing sacred borders, they're forced to question their choices, and re-imagine the true meaning of family.

Melissa DePino lives in Philadelphia and is a founding partner and principal of Leapfrog Group, a marketing communications firm specializing in non-profits. In her spare time, she reads voraciously, writes fiction, practices yoga, and enjoys live music.
Posted by Reviews By Crystal at 3:00 AM