Celebrate all spring has to offer with the sexy shifters of Ashwood Falls in          A Leopard’s Path by Lia Davis! 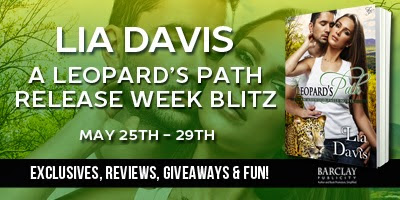 Return to Ashwood Falls with A LEOPARD’S PATH by fan favorite and bestselling author, Lia Davis. Spring has finally arrived and is here to stay, so the sexy shifters are out in full force in Ashwood Falls. But, there’s some discord and tension. Can Kieran and  Ana work through their trust issues to find love or will it all fall apart?

Stolen from her family as an infant, Ana Darwin-Andrews has to piece together her past and present. Her whole life is a lie. There’s only one man she feels she can trust, but even he has secrets.

Kieran Michaels keeps a tight lid on his past, but the Onyx Alpha knows his darkest secrets. Kieran will stop at nothing to destroy the rogue before the past is reveled. Ana can never discover his hands are as bloodstained as their enemy’s, because life without her is not an option.


Other books in the Ashwood Falls series:
A Tiger’s Claim | A Mating Dance | Surrending to the Alpha | Divided Loyalties

It took Ana less than five minutes to track down her mate. Although it wasn’t hard. He was at his apartment near the main entrance to the den. She climbed the stairs to the second floor and knocked on his door. After a few moments, he opened it, wearing nothing but a pair of jeans, the top button undone. She inhaled, drawing in his earthy scent and the aroma of sage soap. “Did I catch you at a bad time?”
Wow, that sounded bitchy. Squash the attitude, Ana.
He raised his brow but didn’t comment as he stepped aside and motioned her inside. “I just got out of the shower and was going to call you.”
“Oh…um, good timing then.” She smiled and searched his handsome features. His damp, black hair stood on end as if he had run a towel over it.
He leaned into her, shutting the door at the same time, then wrapped his arms around her and hugged her close. His rich, musky scent enveloped her, flaring to life the desire she only had for this male. Nipping at her ear, he nuzzled her. A sense of relaxation flooded her, washing away the anxiety she had bottled up. If only they could escape together, far away from this war.
“I missed you,” he whispered before gently biting her throat, not breaking the skin. Her leopard purred and begged for him to mark her. To bite down and sink his fangs into her, claim her. However, he never did.
Her leopard growled and snapped her teeth, no longer wanting to wait for their stubborn mate to make his move. Ana scored her nails down his back. A half-growl, half-hiss escaped him, and he slid one hand to her ass before releasing her.
Chest aching, she refused to meet his gaze as she stepped around him to stand in the middle of his living room. She’d been here with him too many times, in this place of utter frustration. Things heated up, he nipped the skin in the spot where he would bite down to claim her, then pulled away. Every situation ended the same. With a rejection that tore open her heart a little more.
She wasn’t playing the game anymore. Facing him, she pinned him with a glare. “Am I your true mate, or not?”
He froze, his brows drawn together. “You know you are.”
“Do I?” Hurt shifted to anger. Sure, it was the female who made the final decision, but the male had to start things. “You haven’t marked me or started the mating dance. For all I know, you don’t want to.”
A tic formed in his jaw and he stepped forward, his cat in his eyes. “Now is not the time, Ana.”
Her chest tightened. “No, I guess not. In fact, I bet it will never be the right time.”
His cell phone rang, but he stared at her for a long moment before answering it. “Yeah…fuck…okay, I’ll be right there.”
Dread settled over her. With her super-sensitive hearing, she’d heard Keegan’s voice from the other end of the phone. She’d also heard Felix’s name. “What has the bastard done now?”
“Not sure, but it has Keegan ready to hunt him down.”
Not wanting to deal with Kieran and the confusing cyclone of emotions he stirred within her, Ana moved to the door and jerked it open. “I’m going to Ashwood to help Cora test the wards.”
She moved to exit his apartment but stilled when he gripped her arm. “We’ll finish this conversation later.”
When she met his gaze, she saw a hint of worry flash across his gold irises. Shaking her head, she extracted her arm from his grip and hardened her stare. “You come to me when you’re ready, but don’t expect me to wait long.” 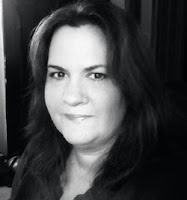 Lia Davis is a mother to two young adults and three equally special kitties, a wife to her soul mate, and a lover of romance. She and her family live in Northeast Florida battling hurricanes and very humid summers. But it’s her home and she loves it!

An accounting major, Lia has always been a dreamer with a very active imagination. The wheels in her head never stop. She ventured into the world of writing and publishing in 2008 and loves it more than she imagined. Writing is stress reliever that allows her to go off in her corner of the house and enter into another world that she created, leaving real life where it belongs.
Her favorite things are spending time with family, traveling, reading, writing, chocolate, coffee, nature and hanging out with her kitties.