GIVEAWAY: Lucy is giving away an Amazon GC during this tour. Please use the RaffleCopter below to enter.

Make sure to follow the whole tour—the more posts you visit throughout, the more chances you’ll get to enter the giveaway. The tour dates are here:

Crystal: Today I am so excited to host Lucy Felthouse. Welcome Lucy! I'm so happy to have you here today. Would you share a little bit about yourself with us today?

Lucy: Of course. My name is Lucy Felthouse and I’m from Derbyshire, in England. As well as writing, I enjoy reading, watching TV and films, spending time out walking and exploring in the countryside with my other half and my dog, and visiting stately homes and other historical sites and properties.

Lucy: Native Tongue is the follow up story to Desert Heat, which I originally wrote for a M/M military boxed set called Unconditional Surrender which was released in October last year. It did really well, and so when the boxed set was taken off sale, I published Desert Heat as a standalone tale. I got lots of messages from people, and comments in reviews, that they’d love to see a follow up story, to find out what happened to the characters next. Naturally I was flattered that the boys had made so much of an impact, so when I got time, I wrote another instalment in their story. I’m delighted to say that so far, reviews have been very positive!


Crystal: Do you have a favorite snack that you like to munch on while writing? If so would you mind sharing what it is with us?

Lucy: Not really—I don’t tend to snack if I can help it. But occasionally if I’m really hungry between  meals I’ll go and get myself a cup of tea and also grab two or three biscuits to dip in it.

Lucy: Sure. I’m quite fond of this scene later in the book, where Hugh and Rustam are in bed together and Rustam gone a little bashful. I can’t say too much more without giving some of the plot away, but it amused me as I was writing it, and still amuses me when I read it back. Though of course it’s better in context ;)

“So stop making excuses and give me a kiss. If you’re too embarrassed for anything else, I promise I won’t hold it against you, but don’t make me sleep next to you without so much as a kiss.” It was a devious move. Balkhi’s libido was just as high as Wilkes’, so he was pretty sure that once they kissed, Balkhi’s hormones would override his conscience. He bloody hoped so, anyway.
Balkhi’s handsome face creased into a smile, and he rolled his eyes, though they glinted with amusement. “All right, all right!”
They moved closer together, and their mouths met. Wilkes sighed happily, relishing the feel of their bodies touching, as well as their lips. They both wore boxer shorts, but having Balkhi’s warm, muscular chest pressed to his was still delicious, particularly since they’d barely touched all day. They’d had no privacy, really, from the moment Balkhi had stepped off the train up until now. Hours spent in each other’s company without being able to express their feelings—Christ, it had been like Afghanistan all over again. Only with less sun, sand and soldiers.
Slowly, Wilkes ramped up the heat of the kiss. If he moved too quickly, Balkhi would suss out his true intentions in a heartbeat. But if he was careful, hopefully he’d believe it was just erotic nature taking its course, rather than his boyfriend being lusty and sneaky.
Tentatively, Wilkes poked out his tongue, seeking entrance to Balkhi’s mouth. The scent of peppermint invaded his nostrils—they’d both brushed their teeth and gargled with mouthwash whilst cleaning up. Mercifully, Balkhi opened up. It took a whole lot of willpower for Wilkes not to dive in and truly possess his lover’s mouth, to show him exactly how much he wanted him, how much he intended to have him. Instead, he kept it slow and steady, sweeping his tongue over Balkhi’s, tickling a little, taunting, having fun.
From Balkhi’s body language, he could tell he was winning him over. Both their cocks were rock hard and ready to go, tenting their boxers and pressing against each other. Balkhi was also relaxing into the embrace, straining towards his lover, silently, possibly unconsciously, asking for more.
Wilkes was just contemplating giving him more when a creak on the landing outside the door made Balkhi spring away from him like a scalded cat and sit bolt upright.
Turning his fearful gaze to the door, he whispered, “What was that?”

Lucy: Oops, I think I mostly covered this in the first question. But I did forget to mention that I quite enjoy knitting. It’s probably something to do with the creative part of me—it’s nice to see the finished article and know I made it. The most ambitious project I’ve taken on was a jumper (sweater), though I’ve also knitted a penguin, owls, an elf, and lots of simpler stuff like hats, and eReader and phone cases.

Lucy: In an ideal world, there’d be no noise at all. I really don’t like noise, and I suspect it’s probably something to do with being an only child. I wasn’t brought up in a house full of screaming and shouting. If I won the lottery I’d buy a house somewhere quiet (I currently live on a pretty typical English residential street) and soundproof my writing room!

I am getting better at blocking out sounds, though. Though things like banging, next door mowing the lawn and the kids across the road playing football right outside are pretty distracting. I end up putting headphones on and playing music if it gets too much.

Crystal: Thank you so much for visiting. It's been a pleasure. Is there anything else you would like to share with us today?

Lucy: Thanks so much for having me here today, it’s been great! And thank you to those of you that have stopped by. Don’t forget to scroll down and enter the giveaway, and also check out the rest of the stops on my blog tour! 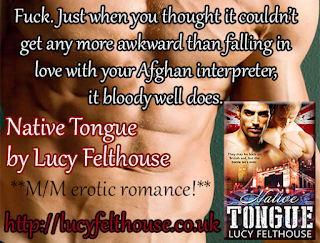 They may be back on British soil, but the battle isn’t over.
When Captain Hugh Wilkes fell for his Afghan interpreter, Rustam Balkhi, he always knew things would never be easy. After months of complete secrecy, their return to England should have spelt an end to the sneaking around and the insane risks. But it seems there are many obstacles for them to overcome before they can truly be happy together. Can they get past those obstacles, or is this one battle too many for their fledgling relationship?

For those of you that haven’t yet read Desert Heat (which is recommended before picking up this book), there’s a great value two book bundle available exclusively on Amazon, and is FREE to Kindle Unlimited members 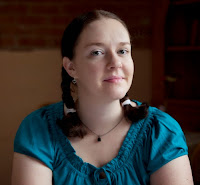