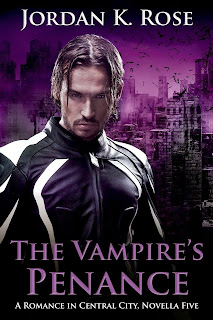 Exposure to sunlight, silver binds and colloidal silver can make any vampire’s existence worst than miserable. Not to mention photographic evidence of Rafe Valentino’s weakest moment is now being shared with every member of The Vampire Guard. In barely a few hours Rafe went from being one of the most terrifying creatures to walk the earth to requiring round the clock nursing care. Now, forced to rely on the company nurse he can’t avoid the feelings he’s denied. But simply because they exist, doesn’t make them right, and if she knew the truth about his past, she’d throw out her nursing pledge and put a stake through his cold heart.

Maddie Van Kool never wanted anything bad to happen to any member of The Vampire Guard, not at all. She’s a nurse. She wants them all healthy. But if one does become injured it’s her job to care for him. Even if he’s the man she’s been pining over for ten years, the same one who’s avoided her as if she were made of silver and sunlight.

Is two hundred fifty years of solitude punishment enough for his sins? Can Rafe forgive himself enough to love Maddie?

This certainly was not the first time Maddie Van Kool had seen a naked man. On the contrary. As a nurse at Golden Pastures Nursing Home, she’d seen plenty of naked men. Of course, they’d all been damn close to 100 years old and wrinkly and dangly, but they were men, and she’d had the obligatory peek at their naked bodies while bathing them. You had to look if you were completing a skin assessment.

In nursing school there’d been other male patients who’d been on her assignments as she learned the proper care of catheters and surgical preparation and other such procedures that would leave a patient exposed.

However, there had not been one, not one that came even remotely close to competing with Raffaele Valentino. Not one. Ever.

The mold had certainly been broken when he was made. Six-two, dark hair, gray eyes. Broad shoulders and chest and nice everything else. He was, generally speaking, a sight of true perfection. Though, tonight was clearly not one of those nights.

She donned her rubber gloves, ensuring they came up and over the sleeves of her gown, which hung long enough to touch the tops of her rubber boots. Then she checked the gauge on the shower nozzle.

“I think it’s ready,” she said from behind her face shield. “I’ll be as gentle as I can.”

“Yeah, you do that,” Rafe growled then let out an annoyed sounding sigh. “Let’s get this done.”

Seated on the shower chair in the infirmary’s fifteen-foot shower he looked enormous. His muscular frame dwarfed the little plastic seat. Beneath the angry red and festering sores his shoulder muscles rippled. He’d insisted on using the shower chair instead of lying on the specially built table that would allow her to rinse him and turn him without disrupting him too much. He held on to the chair for dear life.

Maddie was certain if she bumped him, she’d knock him right out of the seat.

For as long as she’d known him, he’d been stubborn. Maddie wondered what he’d been like as a human. She’d never dared to ask, too afraid he’d tell her to mind her own business.

He wasn’t a man of many words, especially not with her.

She brought the shower hose up to the back of his head and let the delicate lukewarm water spray his hair.

Rafe hissed and jerked away. “Damn it woman! What’s the sprayer set on? Needle pricks?”

Turning the nozzle away, she apologized. “I’m sorry. It’s only set to mist. It doesn’t get any lighter than this.”

The arm rests creaked under his hands, yet, he sat up straight. “Turn it to an even flow. A full flush of water is better than thousands of tiny stings.” He faced forward, head angled down at his feet. “Didn’t they teach you that in nursing school?”

“No. We never covered the care of vampires.”

“You must have been absent that day.”

“I never missed a day.” She switched the nozzle to a full flow of water and checked the temperature once more. “And as I recall the class on post-mortem care did not even hint of vampires. We were trained to expect the dead to remain dead.” 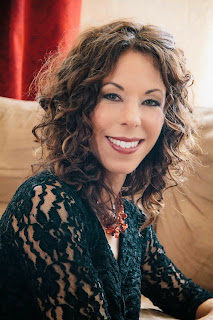 Jordan loves vampires. But if you know anything about Jordan, you already knew that detail. What you didn't know was it wasn't long ago that she began writing about them.

A few years back Jordan received a copy of a popular vampire story from her husband as part of an anniversary gift. Eight weeks and eighteen vampire books later the idea for her first book, Perpetual Light came to her followed very quickly by Eva Prim.

Jordan is a member of the national Romance Writers of America organization and several chapters.

When she's not writing about one vampire or another Jordan enjoys spending time with her husband, Ken and their lovable Labrador, Dino on the beautiful beaches of New England.

Join Eva's Snack of the Week Club for updates on coming events and sneak peeks at Book Two of The Eva Prim Series. http://evaprim.com/snackofWeek.html