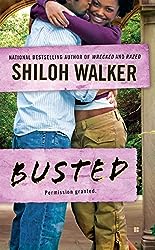 Please use the RaffleCopter at the bottom to enter the giveaway

~*~*~*~*~*~*~*~*~*~*~*~
From the national bestselling author of Wrecked and Razed comes an emotionally charged story of undeniable passion and life-affirming love… Like his brothers Zach and Zane, Trey Barnes thought he had found the love of his life. But fate had other plans. A widower who’s had to raise his five-year-old son on his own, Trey has not allowed himself to be with another woman. Until he meets Ressa Bliss at—of all places—a children’s library program. The beautiful librarian is wonderful with his son, Clay, but every time Trey even considers asking her out, he is tortured by guilt.Fate is indeed fickle. When the two meet again at a conference, this time the attraction is too powerful to resist. But is their connection and passion strong enough to survive Trey’s deep inner torment?

The curls he tangled around his hand were every bit as wild, as soft, as crazy as he’d thought they’d be.
And her mouth was pure, silken sin.
Spinning her around, he pressed her to the wall and caught her hips in his hands, boosted her up. Her dress caught, stopped him from spreading her open and he snarled, shoved it up—only to stop, sanity trying to intrude.
You should pull back. Pull back now before this just goes to hell—
Pull back?
Ressa hooked one leg around his and rolled her hips.
Rolled her hips against him and his cock throbbed, pulsated behind the barrier of his jeans. Desperate, he shoved the skirt of her dress the rest of the way up and cupped the lush curve of her hips, fingers digging into the silken flesh. With a groan, she wrapped her legs around his hips and started to rock, rubbing herself up and down.
His eyes all but rolled into the back of his head.
She was already wet—he could feel her, through something silky and thin.
Tearing his mouth from hers, he braced one hand on the wall, eased back.
Ressa continued to roll her hips against his and he could hear the shuddery, shaking breaths as they escaped, felt his own echo within his chest as he looked down. He was still completely dressed. So was she—but her dress had been pushed up to her waist and a pair of panties painted a murder-red swath across her hips.
And still she moved against him, like that contact was vital.
To him, it was.
But...
But...that voice of reason demanded to be heard now. You can’t do this. You know better. You have to be in control, more in control. You have to be careful.
“Ressa.” Her name was a ragged, broken whisper.
She reached up. “I’ve got something in my bag,” she said softly. “I’m healthy. Haven’t been with anybody in two years. You’ll use a rubber, though.”
Easy, practical...
The voice of reason went silent, soothed.
She stroked her hand down his chest and his body leaped, all but ready to lunge and pounce and take. He kept waiting for something else—for his body to freeze up on him like it had the last time he’d tried to so much as kiss a woman.
“Trey...” She leaned in, pressed her mouth to his neck.