The Missing Planets by Hawk MacKinney ~ The Cairns of Sainctuarie ~ Giveaway

The Missing Planets
The Cairns of Sainctuarie
by Hawk MacKinney


Hawk MacKinney will be awarding a $25 Amazon/BN GC to a randomly drawn winner via rafflecopter during the tour. Please use the RaffleCopter below to enter. Remember you may increase your chances of winning by visiting the other stops on the tour. You may find those locations here.

Planet Terato has become a member of the assembly of the Confederated League of Allied Star Systems. The Murian Outpost Terato once commanded by His Imperial Majesty’s Lord High Chamberlain Herklo Korvo XXXIV is now Teratoan staffed and under the command of Teratoan Eklam a’Qoc.

From the uncharted reaches between galaxies, attacks of extraordinary weaponry come against Terato and the Myr worlds of the Murians. Terminus Terato’s expanded link-portals and converter power modules are virtually useless. Power loss, defenses, communications and travel are totally disrupted. High Chamberlain Korvo’s unexpected return to Terminus on a mission for His Imperial Majesty leaves him stranded on Terato. Attacks grow more massive, more unpredictable; spread across the worlds of the League, as an isolated Terminus struggles among the shattered rubble and whispering remains of an ancient Polity of star-walkers.

Family and friends are lost, empires and civilizations in disarray, Terminus and Planet Terato almost defenseless. Desperate for answers,  their worlds being overwhelmed by this remorseless aggressor, Eklam and Korvo reach across unexplored space in a despairing gamble and the last reserves of converter star-substrate, seeking one insignificant star system of gas giants and rocky inner planets for possible relics of the elusive Lantaraan Polity.

Korvo’s assigned portal coordinates designating outlink Myraa City with inlink Terminus Terato were already active by the time Ek arrived at the portal terminal. A background sibilance of hisses spewed with a number of active portals, the thrums somewhere between hearing and feeling them at the same time. Brilliant pinpoints condensed in the portal fields. Between their portal frames the fields, smaller than the tip of Klara’s sewing needles, more intense than Terato’s two suns, expanded into shapeless undulating masses, growing more solid and taking shape. In adjacent cargo portals enormous crates and objects took form on antigrav platforms. Immense power supplies to several portals snapped off. Heavy-duty servmos moved bulk industrial-size crates, equipment, provisions and materiel toward the service radials and sublevel storage bays. The active portals reminded him of the slow-roll boil of the sweet, dark, ground-bark syrup in the shallow pot his mother used to make candy. Recalled other kitchen smells; oven-warm bread smeared with churned cream. 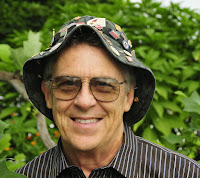 With postgraduate degrees and faculty appointments in several medical universities, Hawk MacKinney has taught graduate courses in both the United States and Jerusalem. In addition to professional articles and texts on chordate neuroembryology, Hawk has authored several works of fiction.

Hawk began writing mysteries for his school newspaper. His works of fiction, historical love stories, science fiction and mystery-thrillers are not genre-centered, but plot-character driven, and reflect his southwest upbringing in Arkansas, Texas and Oklahoma. Moccasin Trace, a historical novel nominated for the prestigious Michael Shaara Award for Excellence in Civil War Fiction and the Writers Notes Book Award, details the family bloodlines of his serial protagonist in the Craige Ingram Mystery Series. Vault of Secrets, the first book in the Ingram series, was followed by Nymrod Resurrection, Blood and Gold, and The Lady of Corpsewood Manor. All have received national attention.  Walking the Pet is Hawk’s latest release in the Ingram series. The first book in another mystery-thriller series is scheduled for release in 2015. The Bleikovat Event, the first volume in The Cairns of Sainctuarie science fiction series, was released in 2012. Its sequel, The Missing Planets, has just been released.